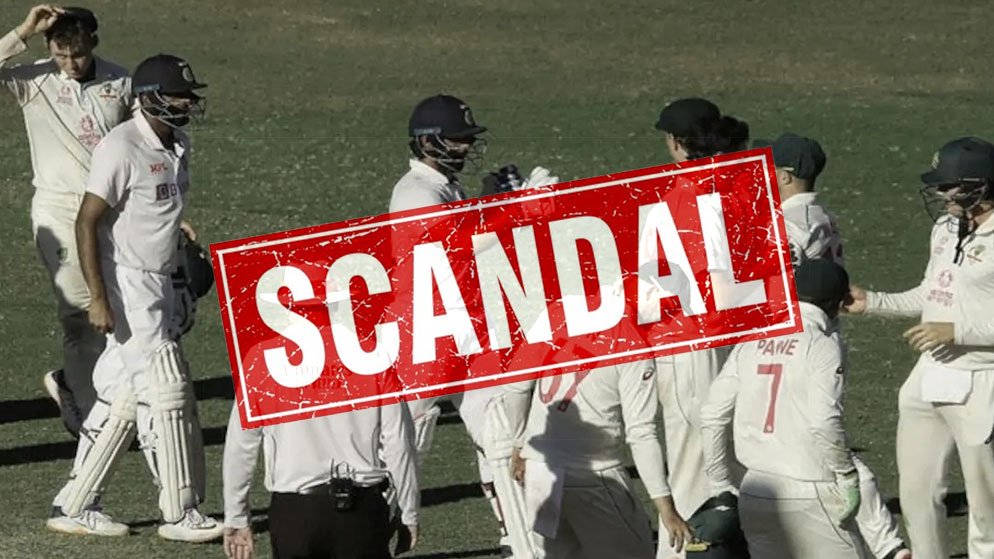 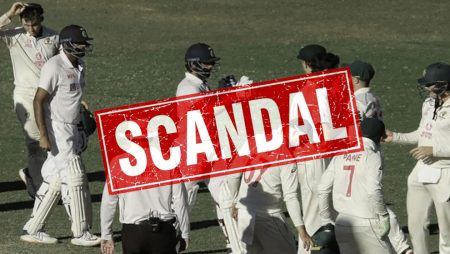 International Cricket has a glorious history starting from the 1900s when the International Cricket Council was formed in 1909. While the glory days continue to roll in every year as more records are made and more wins are achieved by nations, as players retire and new players touch the field of Cricket. But there are a few days that a hardcore cricket fan would not like to recollect.

The scandalous past of International Cricket brings out a different set of emotions. The Biggest Cricket Scandals are the darkest of days in its history, but cannot be ignored. The list is long, containing drug scandal and match-fixing to disrespectful behavior by some of the best cricketers.

The 2008 IPL saw one of the most bizarre cricket scandals as two players. Sreesanth playing for Kings XI Punjab and Harbhajan Singh, playing for Mumbai Indians had a face-off after the game. The latter allegedly slapped Sreesanth and was detained from playing 11 matches for the season. Sreesanth was also given a warning after an emotional display of indiscipline.

The most visible reason for Harbhajan Singh’s actions after the match were justified by Sreesanth himself as ‘losing control because Mumbai Indians lost the match under his captainship’. The video footage for the said incident is not available but Sreesanth was caught getting emotional, with tears in his eyes.

After five years of silence on the slap-gate incident, Sreesanth was witnessed cooking a cover-up for the same last year. The player took to Twitter and explained that the incident was not his fault. He is saddened by the fact that every bad thing that happens in cricket is still compared to the incident. He also stated that he was not slapped. But elbowed by Harbhajan and how he was devastated because he held the player in high regard.

Sreesanth also justified his incident saying that he was afraid of losing his place in the International Cricket arena. He had no support whatsoever at that time. He also talked about how things were sorted out later due to Sachin Tendulkar who organized a dinner for the two to meet and talk.

The test match of 2008 between India and Australia took a turn for the worst as the tensions between the two teams kept mounting. As Australia struck a victory in the test match against India. The match was seen in a bad light due to shocking umpiring decisions; accusations of racism, and heated strains of tension.

But, the focus here needs to be put on the turf between the two captains of Indian and Australian teams; Anil Kumble and Ricky Ponting respectively. At the conference that took place after the match. The Indian captain emphasized the fact that only one team was playing with spirit and accused the team of claiming questionable catches. Ricky Ponting defended his team by saying the match was played as decided before the match even took place and as per discussions between the captains.

Ajit Chandila, Sreesanth, and Ankeet Chavan were arrested in 2013 by Delhi Police in an IPL spot-fixing case. The three players played for Rajasthan Royals in the 2013 Indian Premier League. As per reports, the police thought that the three players were also players within a betting circle, a syndicate of organized crime. They were responsible for altering match fixtures and illegal betting.

The BCCI was shocked by the revelation and showed solidarity with Delhi Police; emphasizing their policies against corruption and any illegal proceedings. Rawi Sawani led the probing investigation of BCCI in this scandal. The board decided that severe consequences will follow the accused.

The three players along with 23 others were arrested by the police under provisions of the Maharashtra Control of Organized Crime Act but were later released on bail since there wasn’t enough evidence. Later, penalties decided by the board that did the investigation were to ban Sreesanth and Chavan for a lifetime, the Gujarati-player Amit Singh a five-year-long ban. The committee was headed by President N Srinivasan and vice-presidents Niranjan Shah and Arun Jaitley.

The International Cricket Council decided to suspend three Pakistani players in 2010. Mohammad Amir, Mohammad Asif, and Salman Butt were accused of spot-fixing during a test match between England and Pakistan. The Pakistan team had been under-playing in hopes of overthrowing the then captain Afridi and putting up Salman Butt as the new captain. These findings came to the clear during investigations.

The spot-fixing done by the three players was in response to a bribe from a bookmaker. The three then carried out certain actions on the field such as deliberate no-balls after planning at organized time periods. The ICC then handed the three players a ban for life from cricket.

Terror Attack In Pakistan in 2009

2009 saw one of the most dangerous and biggest cricket scandals. As masked terrorists attacked a bus containing the Sri Lankan players who had come for a match in Gaddafi Stadium in March 2009.

The team was thankfully evacuated and taken to a nearby airbase. But unfortunately, the attack killed two civilians and six security personnel.  Kumar Sangakkara, Mahela Jayawardene, Thilan Samaraweera, Ajantha Mendis,  and Tharanga Paravitarana were injured but no major injuries were suffered. The Test match was called off and the tour was abandoned, keeping in mind the players’ safety.

On Boxing Day in 1995, Muttiah Muralitharan was no-balled by umpire Darrell Hair Melbourne Cricket Ground. According to the umpire, the move was an illegal bowling action. Rumors circulated that Hair was going to no-ball the spinner but the thought seemed far-fetched. Until he did carry out the action as the controversial spinner was no-balled.

At first, it was thought that the call of a no-ball was made due to a front-foot violation but soon the intentions became clear. The tense situation reached the boiling point. The Sri Lankan players were directed by the captain Arjuna Ranatunga to not shake the Australian players’ hands. Muralitharan was again no-balled in 1999 by Ross Emerson in Adelaide. The tensions between the two teams remained at the peak.

In 2008, the incident occurred during the Sydney Test match that India had won against Australia. Defeated in the semi-finals, Australian player Andrew Symonds was skeptical of India’s victory and celebrations. Harbhajan retaliated with an angry reaction. A year later, the hostilities hadn’t subsided and during another match between Australia and India. Symonds was subjected to a crowd chanting of ‘monkey’ by the Indian audience; led by Harbhajan himself who joined in soon.

No action was taken against Harbhajan at that point in time. Months later, in another test match between India and Australia, on day three of a second test match. Harbhajan was accused of racially abusing Symonds by the Australians. He faced a ban for three matches by the International Cricket Council for the same, but Harbhajan denied the charges. India lost the match against Australia.

2007 World Cup that took place in the Caribbean; where the Pakistan coach of Bob Woolmer was found dead in his room in the Jamaica Pegasus Hotel situated in Kingston, Jamaica. Even though at a glance. It was thought that the cause of death was heart-attack but later it turned into a murder investigation.

After the autopsy, it was discovered that Woolmer had died due to manual strangulation which had led to asphyxia. An 11-member panel was set up to look into the case of the murder of Woolmer but due to their inability to reach a concrete point, the investigation reached an open verdict.

The incident of the Warne Drug Scandal occurred in 2003 when the man of the hour tested positive for drugs called amiloride and hydrochlorothiazide, which are banned diuretics. It was right before the World Cup Opener, the match was going to take place between Australia and Pakistan. The drugs mentioned later are taken for hiding the effects of steroids. Warne at the time played innocent as he described how he was unaware that they were banned drugs and that he took them only for fluid drainage and weight loss.

He also used the excuse of how his mother forced him to pop a pill. Both unknowing to the fact that it contained banned substances. Shane Warne has been in the spotlight for many scandals but this one hit his career. Warne has had weight issues for a long time as well. The excuse could have panned out, but his reputation precedes him and his statement was not taken as truth.

The Australian Cricket Board banned Warne from playing domestic and international matches for a year. He released a statement of how he was disappointed and devastated with the result of it all but did not appeal for the same as he did not want to put his family under any more stress.

Marlon Samuels, a West Indian batsman was convicted with charges of misconduct, bribery, and match-fixing. The investigation leading up to this point was carried out by the West Indies Cricket Board that had been investigating the player for a while due to his affiliations with bookmakers before the 2007 ODI match in Nagpur.

Telephone conversations were tapped into and excerpts between the player and the bookmaker were obtained. The excerpts hinted at the fact that details of the match and important information was leaked by the player to the bookmaker.

Samuels denied all the claims. While the West Indies Board requested that the player should not suffer a ban, the ICC gave the player a two-year-long suspension.